The BlenderBIM Add-on is an add-on to Blender and part of our Category:Blender_Add-ons. It provides functions related to OpenBIM reading, writing, and analysis through a user interface to IfcOpenShell.

BlenderBIM is alpha software, expect things to change and break. It is not ready for regular production work if you're not willing to expend a lot of pain and effort. Please read the BlenderBIM_Add-on_Roadmap to understand progress on the software.

You can find ways to offer financial support in the Donation_Directory.

The BlenderBIM Add-on will transform the industry in three ways: through academia, as part of an AECO workflow, and as a forerunner of new AECO tools.

There are three benefits of the BlenderBIM Add-on for academia: it is free, it makes it easier to teach IFC, and it is open source.

Part of the AECO workflow[edit]

There are three benefits of having the BlenderBIM Addon as part of the AECO workflow: It is an alternative to paid software, it works together with paid software, and it improves quality.

Some users may choose to continue to use paid software, just as many choose to use Microsoft Office, rather than the free open source alternatives available. What is important is that users will have a choice.

There is a rapidly growing number of utilities that are NativeIFC. These utilities, things like IFC checkers and IFC viewers, are useful tools, but they operate on the peripheral of AECO workflows. The BlenderBIM Add-on is game-changing because it aims to provide a NativeIFC alternative to the core applications in AECO workflows.

Works together with paid software[edit]

The BlenderBIM Add-on can work together with paid AECO software. You will rarely find an architect who uses both Revit and ArchiCAD on the same project; although sometimes the architect uses ArchiCAD and other members of the design team use Revit.

The BlenderBIM Addon has many features to address user needs on large projects using Revit or ArchiCAD.

Often, it is the companies who follow closely behind the trailblazer who make the biggest impact. For example, a computer user interface using a desktop, windows, and mouse was first developed at Xerox’s Palo Alto research centre, but it was Microsoft and Apple who brought them to the mainstream.

Who knows, maybe some company will grab hold of the NativeIFC approach and build a suite of world-class applications that ends up dominating the market. That would be great. There will always be the BlenderBIM Add-on as a free, open source alternative.

Even though the BlenderBIM Add-on is currently in its early stages, its potential has already been recognised. It won the buildingSMART 2020 technology award. It was given a MegaGrant by Epic Games. And in 2021, Google sponsored two people to work on it as part of their “Summer of Code” initiative. 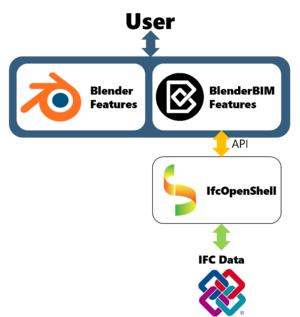 A user can write a script to access the features directly, without a Blender user interface. This can be useful when you want to automate a series of tasks.

IfcOpenShell has been around for a decade and already works as an enabling platform for many types of utilities and other software applications. Some of these may be free, while others may be paid software, but all of them will work together seamlessly because they all use NativeIFC.

A developer may also choose to build their application on top of the xBIM platform or the IFC.js platform. Applications built on any of these platforms will work together seamlessly because they are all based on NativeIFC.

There is an emerging need for digital tools, tailored to the AECO industry, that simplify communications, coordination, and collaboration between stakeholders, including clients and facility managers. Fortunately, buildingSMART anticipated this need and developed a BIM Collaboration Format, or BCF, for issue management. Tools using the BCF specification allow smart issue tracking and smart issue exchange between stakeholders. The BCF specification supports both a workflow using a file exchange and a workflow using an API in a client-server environment. The BlenderBIM Add-on is one of the first applications to support the new BCF API, ready for others to build upon. Just as IFCopenshell, xBIM and IFC.js are platforms for new NativeIFC applications, the BCF API is a platform for new applications that focus on smart collaboration between AECO stakeholders.

The BlenderBIM website has a tutorial to export your first model.

You can then read these articles to learn to use the add-on in more detail.

We are collecting tips, tricks and best practices for using the BlenderBIM Add-on on this page: