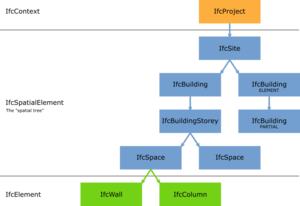 IFC data often, but not always, contains what is known as a spatial tree or spatial hierarchy. This is a tree of classes that inherit from IfcSpatialElement that describe the spatial organisation of a building. For example, it might describe that a site contains two buildings, and each building contains 5 storeys, and each storey contains 3 spaces.

Usually at the bottom of the spatial hierarchy, the spatial tree may end and contain actual physical built elements, such as walls and columns. Walls and columns are not IfcSpatialElement, but instead belong to IfcElement. To an end-user, a space containing a wall and column is similar to how a site contains a building, but in IFC, this is known as a spatial containment relationship.

A list of possible subclasses of IfcSpatialElement is shown below.