Please consider funding this Bountysource in order to provide the developer(s) with the much needed funding to help improve these 2D documentation features in Blender.

Although still in early alpha development, the BlenderBIM add-on provides the capability to publish a complete traditional 2D construction documentation of your model. The result is currently a combination of vector and raster data, compiled into SVG sheet files. (the projected geometry is rendered as a raster image, the cut geometry and any 2D annotations are kept as vectors)

There is one fundamental difference to the way traditional software handles 2D documentation. The 2D vector output from BlenderBIM add-on is not a finished fixed vector image, but as per definition of SVG a set of 2D geometry with applied CSS styling. That means, that in theory we can output one set of drawings and only by changing the applied CSS we can control the LOD.

The SVG sheet file is compiled from a SVG sheet template and one or more views exported from Blender, interpreting any variables included in the template and/or view.

The resulting SVG sheets can be easily converted into pdf files for presentation or dxf for collaboration. Examples of available converters:

A view is basically an orthographic camera, which you can place manually, or by using the "Add Drawing" button in Output Properties > SVG Drawings. This command creates the necessary camera with a default name, centered on origin. The newly created camera is automatically activated and you can rename it by double clicking its name.

You can also activate any camera used as a view by selecting it from the list and using the "Activate View" command.

Selecting geometry to be cut[edit]

The raster image is rendered directly from your Blender model. The vector section is however not performed on the Blender geometry, but on an external IFC file.

How to export an IFC file from Blender.

The ifc file on which the vector cut will be performed has to be chosen under Output Properties > SVG Drawings > Add IFC File and selecting one or more IFC files. 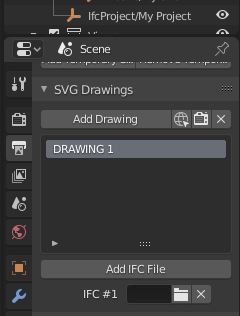 Selecting an IFC file for a section cut

As mentioned earlier, the resulting SVG file gets its final appearance from the style sheet, defined in the Project data directory. The CSS conrols the appearance using classes, which means that by assigning an arbitrary class, any group of objects can be assigned a specific appearance. Some of the classes are defined as an example in the PROJECT_DATA_DIRECTORY⁄styles⁄default.CSS, defining the appearance of the annotation elements added through UI (see below) and some basic material hatches. The symbols and hatches referenced by the CSS file are standard SVG files stored in PROJECT_DATA_DIRECTORY⁄templates⁄

The predefined material classes are assigned automatically to all objects, based on the name of their Blender material. As an example, when no material is defined, the section hatch in SVG is the default black. By assigning a material named named "brick" (case sensitive!) to an object, its resulting hatch in SVG changes in two parallel diagonal lines.

There are currently two ways to add annotation. First, the BlenderBIM plug-in recognizes a number of appropriately named objects on view export and interprets them as 2D annotation and second, it also recognizes the annotation added by the MeasureIt-ARCH plug-in. (currently only in the latest git master branch, see MeasureIt_ARCH readme for more information on how to make it work with BlenderBIM)

Currently recognized objects with their respective necessary names are: 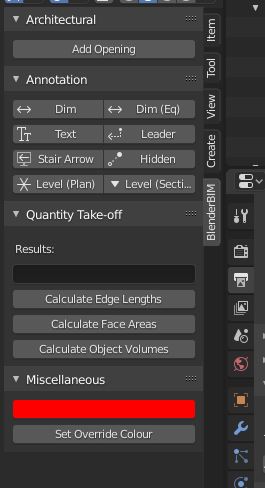 Go here for adding labels, like wall/window tags, that are intelligently linked to the object's data. 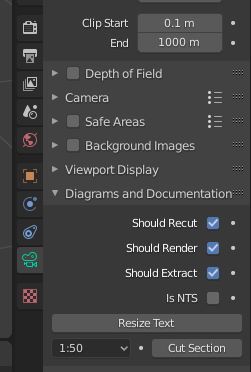