This page contains FAQ's mainly gathered and referred to Forum

Version of Blender to use ?[edit]

Which version of Blender is safest to use with BlenderBim?

a Latest stable Blender until otherwise stated on the downloads page

No update after export ? Forum Link[edit]

When I create a random mesh and assign the IFC class, I can export it correctly to IFC.

However, everytime I start editing the mesh in Blender and repeat the export, the IFC file keeps the first geometry.

Am I missing a step? Do you need to reassign class or remove and regenerate the representation first?

In the master branch, there is now a mode to auto update every time you update it in Blender, so that you do not need to explicitly tell it to regenerate the representation.

The reason for this behaviour is:

The UX is still far from polished - as you've discovered, it was not obvious to you as a user how these workflows occur. In fact, there are still no gizmos to edit parametric shapes visually in 3D, only via entering properties, which is quite poor UX. There is also currently no way to convert from mesh to parametric (the function exists, but no UX for it - so we will bring it back in the next release perhaps), although you can convert from parametric to mesh. There is also no UX to edit heavily nested parametric IFC geometry (e.g. nested CSG booleans with different type of solids). However, the code now supports all of these things at a fundamental programmatic level - so we can start moving away from the guts and into the UX.

Hope it helps describe the current state of the software. Things are changing fast, though

Q: How do you handle ifc classification for multi part objects, for example, a desk made up of 5 parts would have an empty at the top level of the hierarchy named Desk. In ifc, this hierarchy is not preserved and the only way I've seen to get the entire desk to export as ifc is to classify each of the five components as an ifc desk, which is neither logical nor helpful. If my hierarchy named Desk and every collection instance linked to it can be exported either as one compound object each named Desk, or a multipart object with the hierarchy preserved and the top level of the hierarchy named Desk, that would be most helpful. This seems to me like a good candidate for the sort of automation python tends to be good at, which would be nice to have as part of the export process.

A: The correct technique is to use IFC aggregations. You can find the ability to create aggregations from the scene properties. It effectively creates a collection instance, and lets you retain the class hierarchy underneath it.

I've come to find collection instances to be really handy in organizing my work, so that for repetitive objects or groups of objects, I only need to edit the main object and the changes get propagated to all the instances. However collections instances don't show up when the file is exported to ifc. How can collection instances be made to appear in ifc exports without making the instances real, while also preserving object hierarchies?

The correct technique is to use IFC aggregations. You can find the ability to create aggregations from the scene properties. It effectively creates a collection instance, and lets you retain the class hierarchy underneath it. Dion

There is a page started on IFC_aggregates, which needs improving.

The search panel gives you what you're after. 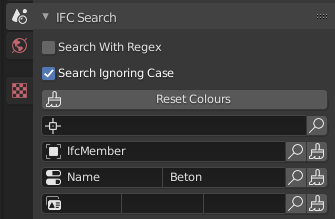 To find those of the type "Beton", go to an object of a type you want to select, then in the object properties this button will select all of that type: 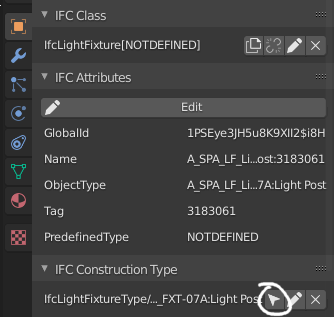 Mesh Optimization Tips to remember while working with BlenderBIM[edit]

Paraphrased from comment by Dion Moult on the OSArch forum. 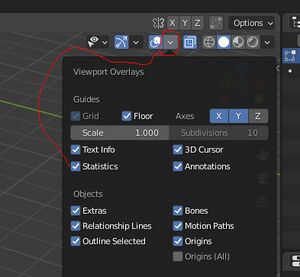 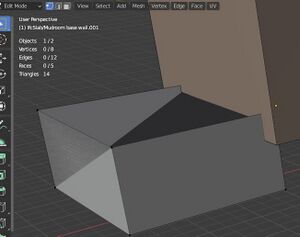